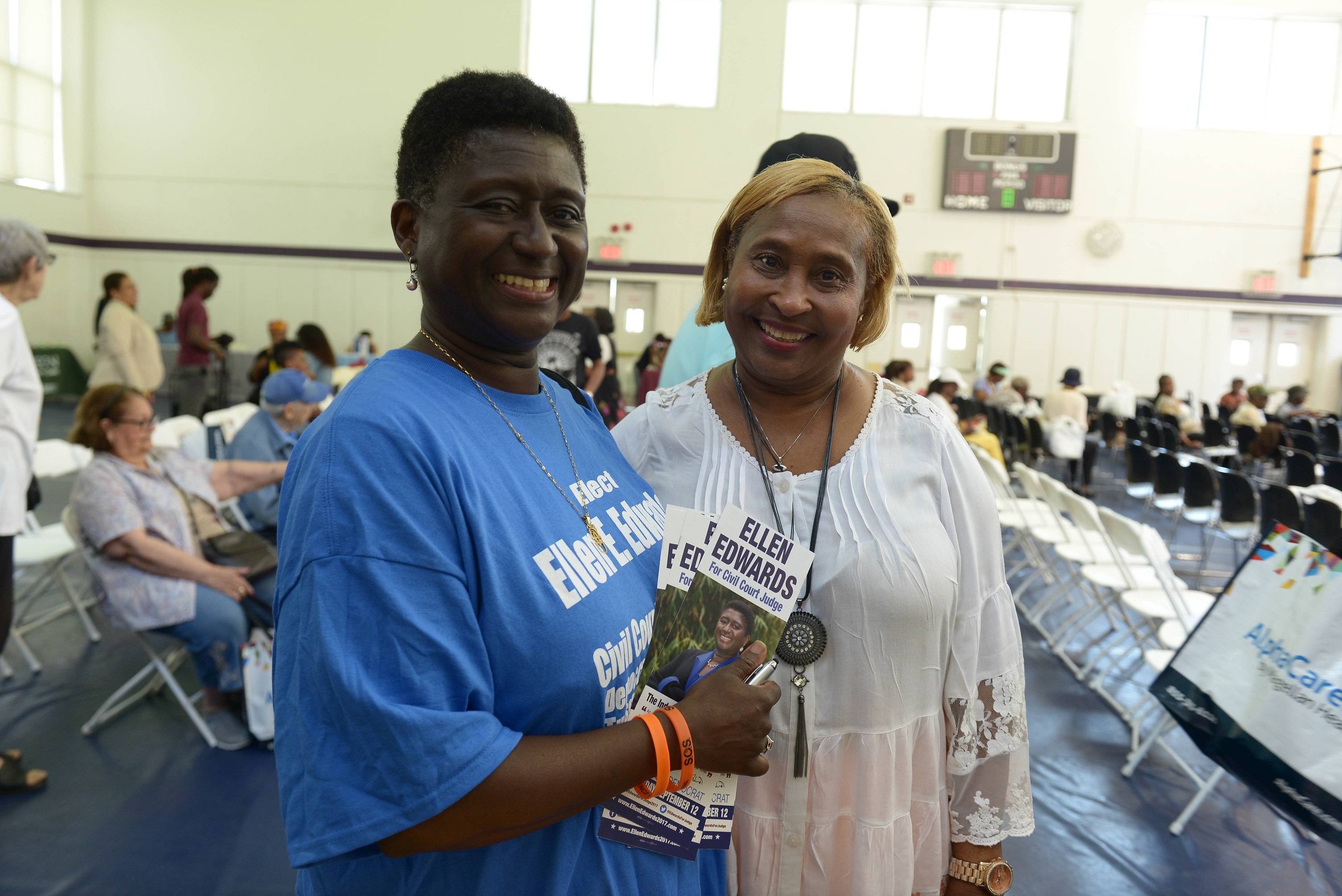 What Is Your Background?

I have lived in Brooklyn my entire life — Crown Heights — it used to be Bedford-Stuyvesant and now its Crown Heights. I’ve been on Saint Marks and Bedford Avenue for, basically, my whole life. Before that I was on Bergen Street, which is right around the corner, so, I’ve been in the same neighborhood for quite awhile. I went to school in Brooklyn. I went to P.S. 138 — P.S. 241 — I went to Jackie Robinson Jr High School. I was selected to go to John Dewey High School, which was a specialized high school at the time. John Dewey was kind of like a college, so they let you select your own classes and have free time, et cetera. Then, I went to City College of New York, CCNY. I was in the Urban Legal Studies Program. The great Haywood Burns was the head of that program and they integrated the practice of law into community and activism, et cetera. So, that was part of my training. I went to Emory University School of Law. That’s in Atlanta, Georgia. I went there because they gave me a full academic scholarship for the three years. So, they was paying and I was playing.

I came back to New York. I first worked in a small firm, then I worked for 32BJ Legal Services. I was in their criminal division, so I represented union members who had criminal cases up to E felonies and, thereafter, I’ve been in private practice.So, I’ve been in private practice for 25 years, been practicing for 28 years. So, it’s a quarter of a century having my own office. I’ve been at the same location on Montague Street. I do criminal defense, I do estates, I do real estate, and a part of my practice is to assist the community. So, I do pro-bono cases, meaning I don’t get paid, or I get like a fried chicken retainer or a blunt cake retainer. I’ve been helpful to the community by giving different seminars. Like today (at the Brooklyn Diabetes Awareness Health Fair) I was very pushy about people getting their health care proxy. A lot of us need education and sometimes people only think in terms of lawyers when there are bad things that happen. But, there are a lot of good things that lawyers can do to help facilitate problems — the resolution of problems and the health care proxy is one of those things. So, I’ve seen a lot of people go into the hospital or have a medical emergency and then there is no one specifically designated to make the decision as to what should happen to the person. And, it winds up in a lot of family dissension, confusion, and it’s not helpful to the person that’s sick. So, this is a very small document, it takes less than a minute to fill out, but it’s very helpful. This is a health fair and this is part of your health, having someone designated to help make a decision if you’re unable to do so.

I’m also a guardian ad litem, which means I help people who are somewhat incapacitated. Either they have mental issues or they are seniors who just can’t maneuver and I assist them in housing court, help them get their benefits, help them get arrears and the arrears in their rent resolved, help them get repairs in their apartments done If the landlord previously had not been willing to that, and that’s part of the practice that I do. I also do matrimonial, I do real estate, I’m a real estate broker. So, I‘ve been in most of the courts in Brooklyn and Manhattan, et cetera. I’ve argued the Court of Appeals, I have been an appellate lawyer to write appeals for people who are indigent.

When I was In law school, I was an Intern with the ACLU, which is the American Civil Liberties Union, and I worked on the death penalty case for Janice Buttrum. And thank God, she’s still alive. And that’s based on an issue I worked on with them regarding pretrial publicity. And so, I had to document all of the pre-trial publicity to make the argument that there was excessive pretrial publicity and her case should not have been heard in the same county where the incident occurred. So, that’s one of the constitutional issues that were raised, and that is the only issue that went up to the Supreme Court and was successful in getting her conviction reversed. And, over the years, she had re-hearings, etcetera, and I’m happy to say I spoke to her this year and she’s still alive and she’s getting ready to get released on probation because her sentence was illegal in terms of her sentencing to death because she was a juvenile and you’re not supposed to be able to give juveniles life imprisonment. You’re supposed to give them an opportunity to rehabilitate themselves. So, she and I are the same age. So, at the time, that case was very important to me because I saw a young person my age and they were on death row and it was a very horrible thing that occurred. However, she was a kid, and kids are very impressionable. And the adult that led her into that situation — he committed suicide. And so, there she was left. And she’s still alive, and I’m happy to say I was a part of that and that’s what I’m doing. That’s my background.

Why Are You Running For Civil Court Judge?

I’ve seen a change in the political climate in the country. I’ve seen a number of tragedies that have occurred, and I feel, given my experience, my commitment to serving the community, and my temperament, I could make a difference. And it’s not my assessment that led me to run, it’s other people asked me, people who’ve seen me in court: court officers, stenographers, and people kept asking me: when are you going to run, how come you aren’t running? And when I saw what happened in January, I decided that I could make a difference. I saw judges stand up and I believe that the judiciary should be a separate branch of the government. Politicians have their place, legislators have their place, and the judiciary has its place And the judiciary should remain impartial and separate, and not be influenced by who you know or who knows you. So, it’s a place that’s necessary for the continuation of our democracy, and to preserve it. And so, when I heard certain pronouncements from the executive, I was like ‘hey, that’s why we’re supposed to be separate, we’re supposed to base our opinions based on the facts and our understanding of the law and not based on someone’s political persuasion.

— It’s been an interesting running. I’m enjoying the process. I’m a little bit sleepy sometimes, but you know I revive myself, and I think that this is really important (referring to the Health Care Proxy Forms). I’ve done wills for people for many years, and people come in for the interview. And it’s so hard to them to come back because they feel if they fill out a will, they’re going to die. So, this I think is a very good, very useful tool. That and a Power of Attorney, If you give it to the right person. These are very useful, simple tools that can assist you in case you have a problem. I make sure to print these up and I’m even more forceful with people signing these than I am signing my petition because I just don’t want to just ask people for my vote, I want you to come away with something that’s beneficial to you. And that’s what I’ve been all along and I’ve been continuing to do that.

What Reforms Do You Plan On Bringing To The Civil Court System?

Also, a lot of people who have cases, sometimes going to court means you’re going to lose your job. And, so people don’t show up because they have to go to work. So, I think the courts can accommodate people by having a night court. They have night court in Criminal Court but they don’t use it for people who can’t come during the day. And the same way they have those cases on during the day, they can just take those cases and put it in — you know, people who don’t show up or can’t show up — they can put it in that courtroom that they’re using and it’s under-utilized and people who have their cases done in the evening — not to say that everybody can access that at night, but that would be able to help, particularly people who don’t have means, and sometimes going to court that second or third time may mean the difference between you having a job and losing your job the same way they have in have in Civil Court you have cases going on — you may lose your job. If you have the choice between losing your job so that you can keep your apartment or going to see about your apartment and you can lose your job, that’s a circular thing. So, the courts can do that to make things a little more easier.

How Are You Going To Advocate Senior Rights If You’re Elected?

Well, you can’t be an advocate for seniors when you’re a judge. You have to rule on the facts and the law and that’s what you have to do. But, I have an appreciation for the issues that seniors face. I’ve worked with a lot of seniors and I’m very sensitive to what their needs are. So, in terms of having additional senses, like having a guardian ad litem, I would insist on that. Having translators available for them. I believe if you had more social workers in the courthouse, that would really facilitate a lot of things. Some people have mental disabilities that are undiagnosed, and if we had someone to diagnose them earlier it may facilitate the process moving smoother. So, I think if we could advocate for having more social workers, that would be a tremendous aid. So, that’s what I would be advocating for in my courtroom, to have those ancillary facilities or motives available to people.

Why Should People Vote For You?

Because I’m a great person, and I love people. I don’t have any axes to grind. I’m fair-minded. People say I’m very even-tempered. I’m very respectful of people, of their cultures, of their religious practices, of their gender preferences. That’s why. And I’ll be a fair-minded judge who exercises independent judgment for the betterment of Brooklyn. I mean I’m sure other people have other things but — that’s me, that’s what I am. I’m a Brooklyn girl and I’m here to make things better.