NYC Senior Housing To Double To 30,000 Affordable Units According To Mayor de Blasio 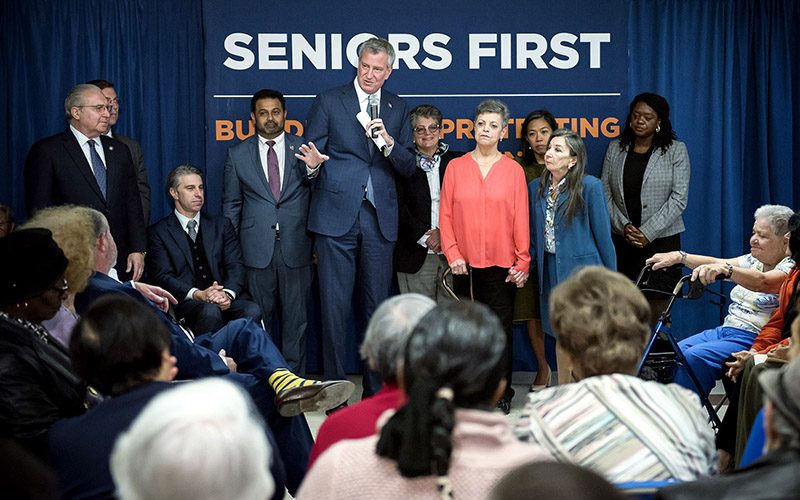 NEW YORK––Mayor Bill de Blasio recently announced “Seniors First,” a slate of new affordable housing programs that will increase the amount of senior housing across the city. In total, the City will double its commitment to senior housing over the extended 12-year Housing New York plan, serving 30,000 senior households by 2026.

The number of seniors in New York is projected to grow 40 percent by 2040. To meet the housing needs of older New Yorkers on fixed incomes, the City will invest $150 million to make more homes accessible to seniors and people with disabilities; build new 100 percent affordable developments on underused NYCHA, and public and private sites; and preserve aging senior housing built as part of HUD’s 202 program.

“The federal government has gotten out of the business of building senior housing, so New York City is jumping into it in a big way. We won’t let seniors be pushed out of the neighborhoods they helped build,” said Mayor de Blasio.

“Seniors First” is needed to address the shortage of affordable housing for low-income seniors, who are the most rent-burdened and more likely to live on fixed-incomes than other New York City populations.

Through a multi-pronged strategy, the City will serve 25,000 senior households—in addition to the 5,000 already reached, through:

15,000 Age-Friendly Homes: The City is making a $150 million new commitment to address the needs of senior residents in buildings preserved over the next eight years. HPD will conduct assessments of the apartments it preserves with residents 62 or older, and make that housing accessible through improvements such as installing lever door handles and shower bars and widening doors to make bathrooms and kitchens wheelchair-friendly. These improvements will ensure seniors can age in place and retain their mobility as they age.

4,000 New Senior Apartments: HPD is committed to developing 4,000 new affordable senior homes through its Senior Affordable Rental Apartments Program. Of the total under the Mayor’s housing plan, about 1,000 will now be constructed on a dedicated pipeline of underused NYCHA land. They will be developed in addition to the existing 10,000 affordable apartments already planned through NextGen NYCHA’s 100% affordable program.

6,000 Senior Apartments Protected: For decades, the federal government built hundreds of senior housing developments across the city through the HUD 202 program. These buildings are privately owned and operated, and many face physical deterioration that threatens their continued affordability. The City will target those properties most in need of protection, making repairs and providing long-term financing in exchange for continued affordability.

“As we accelerate and expand our work through Housing New York, we must put our seniors first. Today, we are doubling our initial commitment to senior housing and introducing a three-fold strategy to deliver on this critical priority. Through a new program to make senior homes more accessible in the buildings we rehab across the city, a targeted focus on protecting the existing stock of senior buildings, and a dedicated pipeline of underused NYCHA land for new affordable senior housing, we are operating on all cylinders to serve the seniors who helped build our great city,” said Housing Preservation and Development Commissioner Maria Torres-Springer. “I want to thank the Mayor, NYCHA Chair Shola Olatoye, HDC President Eric Enderlin, and all my colleagues across City government for their partnership to keep our seniors in safe, quality, affordable housing.”

“As New York City’s senior population grows, so must our efforts to ensure no one is left without the dignity of a secure, accessible, and affordable place to live,” said Housing Development Corporation President Eric Enderlin. “With this latest initiative under the Mayor’s housing plan, we are keeping pace with increased demand for affordable housing and directing critical resources to New Yorkers in greatest need.”

“I am so pleased that the administration is two years ahead of schedule on its affordable housing plan, and moving ahead on even more robust plans to construct and preserve affordable housing for seniors,” said Department for the Aging Commissioner Donna Corrado. “The demand for affordable senior housing in every community will only grow as New York City’s older adult population is expected to increase by approximately 16.7% over the next decade.”

“Seniors First is an important step in ensuring New York City supports its elderly residents, and NYCHA is proud to play a part in providing seniors an affordable home,” said NYCHA Chair and CEO Shola Olatoye. “One in five of our residents is over 62, and with NextGen NYCHA, we are making improvements every day to ensure our residents can live safely and comfortably in their homes.”

“I’ve been working with the City and the Mayor on senior housing for the last four years, the most recent in my capacity as Assembly Housing Chair. I’ve been gratified over the past year by the great progress we’ve made in moving our housing agenda forward on the city and state levels to ensure that seniors in Brooklyn and all throughout our city and state are taken care of,” said Assembly Member Steven Cymbrowitz, Chair of the State Assembly Housing Committee.

“The affordable housing and homelessness crisis in this city touches all areas and all populations. We in city government must ensure that our plan is comprehensive, that no one is left behind. Senior citizens are a population that is often targeted and taken advantage of in housing, and I thank the administration for taking these steps to protect and create affordable housing specifically geared toward these seniors,” said Council Member Jumaane Williams, Chair of the City Council Housing and Buildings Committee.

“Our city’s seniors, the cornerstones of our communities, have earned the dignity and security of an affordable home in the neighborhoods they helped make great, a home they can enjoy well into their golden years. I thank Mayor de Blasio for expanding his administration’s commitment to create and preserve senior housing in Brooklyn. We can and must do more to advance affordability for this priority population,” Brooklyn Borough President Eric L. Adams said.

“At JASA, we know first-hand how important it is to provide New York’s senior residents with an opportunity to age in place in homes of their own choosing,” said Donald Manning, Director of Housing for JASA. “We applaud the ‘Seniors First’ initiative, which will help assure much-needed housing options for the city’s older population now, and in the coming year.”

Next PostNYC Health Insurance: What is an HMO Plan? (Health Maintenance Organization)