Seniors of NYC: This is Manny 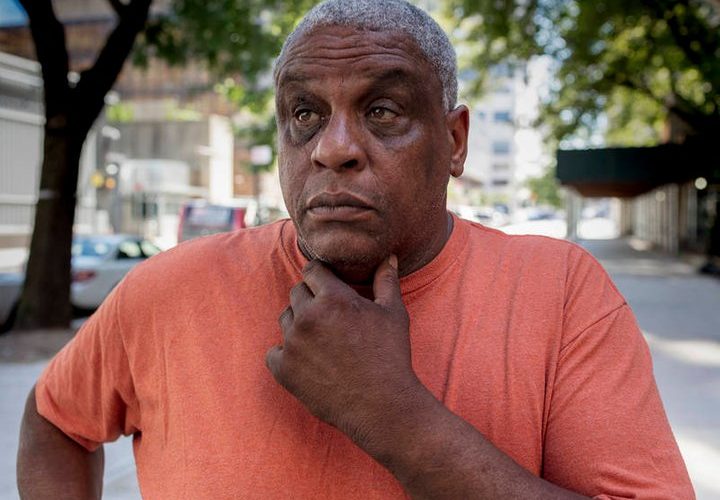 I have seen Manny many times over the past two years.  He lives on 65th street right around the corner from my apartment.  I had interviewed several of his friends, but Manny was in his 50s and he seemed too young for the blog.  However, he has now reached the ripe old age of 60. I wanted to know his story.

Manny was born in Staten Island and moved to Manhattan as a young man.  He was married twice, and both of his wives died.  His first wife died of cancer after they were married for only three years and his second wife died of breast cancer after fifteen years of marriage.

At the time of her diagnosis, they were working to establish themselves in a home, so they could raise a family.  At that point, they decided they should not have children.  When she died, Manny said his life fell apart.  He started doing drugs-cocaine, crack cocaine and heroin.  He lost everything, including the will to live.  For three years, he lived on the streets, sleeping in basements, hoping to die.

Clearly, Manny turned his life around.  He has been clean for twenty years now.  I asked him how he did it.  He was arrested and when he appeared before the judge, that judge gave him a choice between jail or a drug program.  Manny chose the program – Samaritan House. Once in the program, he began to believe there was a reason to live and wanted to put his life back together.  He told the story of when the staff said he was ready to leave the program. But he felt he was not ready to leave.  He fought with them.  He knew that if he left then, he would fall again.  He knew he needed more time.  He convinced the staff and stayed on for several more months.  Although Manny spends lots of time in front of his building, I will never see him in the back courtyard- that’s where the drugs can be found, and he wants no part of it.

Manny lives alone now and still works.  He was an auto mechanic who had worked on high-end cars.  He told me that he could strip down a Maserati or a Jaguar to the bare bones and rebuild it-no problem.  He now works as an independent contractor in construction, doing renovations to apartments and brownstones.

Getting out every day to either work or to be with friends from the neighborhood is important for Manny.  He is grateful for his recovery from drugs and wants to be helpful to others.  He has befriended three young men from the Philippines whom he helps financially with their college expenses.

Getting out and being involved with his friends and neighbors makes life meaningful for Manny.  He is a treasure in his Upper West Side neighborhood.

Previous PostSeniors of NYC: This is Johnny

Next PostFree Screening Mammograms for Residents of Brooklyn and Queens Until May 31, 2019