Seniors of NYC: This is Hal 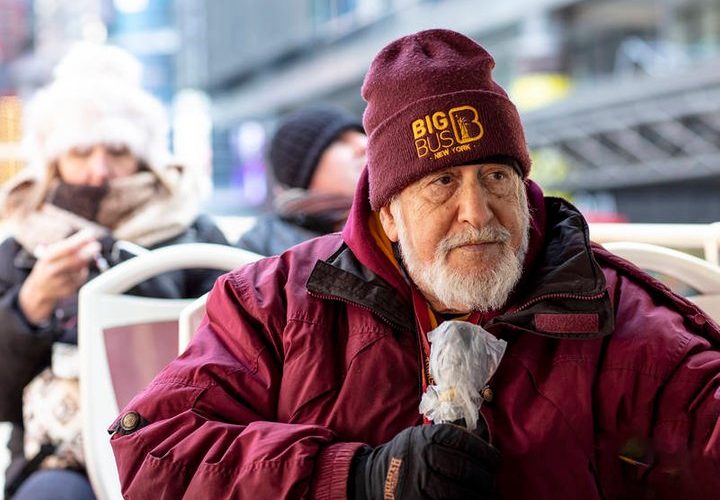 I received an email from Hal complimenting me on the blog Getting Old and Getting Out in New York City.  He introduced himself as a Visual Journalist and licensed NYC Sightseeing Guide who works three days a week, year-round, on the top of an open sightseeing bus, regardless of the weather and he is 83 years old.  As a matter of fact, I received this email on a very, very cold windy February day when it was snowing and raining, and he was on his way to work.  I immediately returned his email and told him that I would like to meet him and photograph him.  We set a time to meet for breakfast.  Hal is an interesting and talkative man.  He graduated from Adelphi College in 1956 with a bachelor’s degree in English and from 1957 to 1960 he was in the Navy on the aircraft carrier USS Essex.

The Essex is a prototype of the carriers such as the Intrepid.  Hal would stand on the signal bridge of the ship 18 stories above the sea hoisting signal flags and sending semaphore and flashing lights. He said that if he could stand on the signal bridge in all types of weather, he could sit on top of an open tour bus in this weather without a problem.

After undergraduate work at Adelphi and four years in the Navy, Hal attended New York University Law School and worked as a Civil Rights Attorney.  During the Vietnam war, Hal was a draft counselor.  He was interested in the 1st Amendment rights of a conscientious objector and the constitutional right to believe for whatever reason, religious, political or otherwise, that they should not be subject to the draft.

Hal has been married three times and he has been married to his current wife for 27 years.  He has 4 children and 4 grandchildren.  He proudly showed me a photograph of one of his daughters and granddaughters.

Hal has been a licensed New York City tour guide for 14 years.  At the age of 83, he works three full days a week.  I took a tour with him on a BigBusToursNYC double-decker and found it informative and interesting.  Clearly, Hal knows more details than most native New Yorkers.  I asked him, as someone who knows the city so well and meets people from all over the United States and the world every day, what is it that he likes best about the city.  He said very firmly “It is not the rest of the United States.  Luckily here on the Upper West Side, Harry Truman is still President.”

Hal was a premature birth, weighing less than three pounds.  In 1935 (when he was born), 3-pound infants were considered not viable and there was no neonatal care for such infants.  However, one of the doctors thought he could be saved and put him in a tin tub with 100-watt light bulbs. Hal survived.  He grew up in Long Beach. After returning from his service in the Navy, he knew that living in Manhattan was what he wanted.  He initially moved to the East Village.  But then move to the Upper West Side. He has lived here for 31 years.

Previous PostSeniors of NYC: This is Susan