Seniors of NYC: This is Johnny 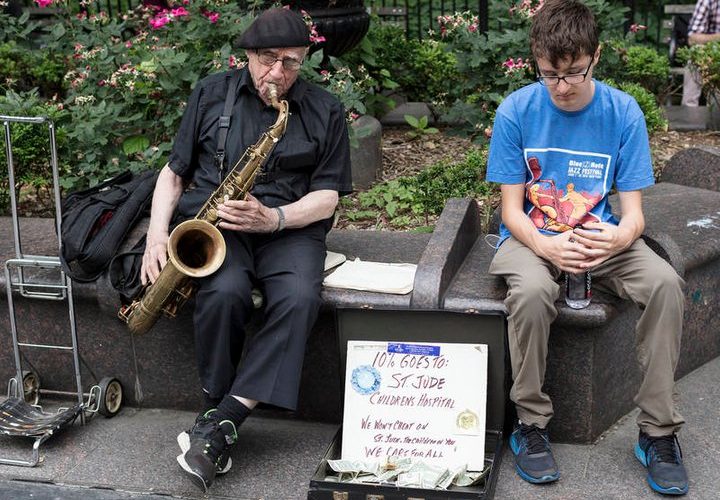 This is Johnny (Dee) Dentato.  The first time I saw him, he was sitting in the park at 72nd Street and Broadway.  He was sitting in the bright sunlight playing his saxophone.  I was sitting in the shade on the other side of the park.  Because shooting in the bright sunlight is not the best way to get good images, I continued to sit in the shade and watch the shadows creep closer and closer to Johnny until they encompassed him completely.  Now that it was better light to photograph, I sat next to him as he was playing Big Band music from the 30s and 1940s.  As he played, people dropped a dollar or two into his open saxophone case.  There were dollar bills, change, a notebook with some sort of list that had check marks, and a large sign taped to his case.  It was that sign that made Johnny different than the usual New York City street musician: “10% goes to: St. Jude Children’s Hospital.  We won’t cheat on St. Jude, the children or you.”

I dropped a dollar bill in the case, seemed like a worthy cause to me and continued to wait for Johnny to stop playing.

I asked why St. Jude’s.  He said he saw the commercials on television and thought that would be a good place to donate money which he has been doing for about 8 years.  They call him from time to time to thank him which makes him feel good about how he is helping them.

As we were talking, he gave me a flyer announcing a performance that he was giving as a tribute to his good friend, Nat King Cole.  He said he was very close with Nat King Cole and he worked with him in musical arrangements for ten years.  As people would drop money in his case, Johnny handed out this flyer and invited people to come.  Many people who passed by said hello and seemed to know Johnny.

When I asked Johnny if he had been married, he said too long, and that he was divorced three times.  When I asked about children, I unknowingly touched on a tender issue.  Johnny had a daughter who drowned many years ago at the age of 5.  Johnny paused with a distressed expression.  This is a wound that never completely heals.  He said it was a long time ago and then continued playing the theme song to Casablanca.

I have seen Johnny several times since he is so often out playing in the same spot and time after 3:30 in the afternoon.  One day there was a young man sitting and listening to him.  Peter is from Nevada and this is his second visit to New York City.  He is a high school student-his aunt lives in NYC and Peter is visiting her.  Peter thought that it was great that he could sit in a park and make friends with a stranger while listening to his music.

Johnny said that he often credits his need to play music that gets him out of his apartment.  He then paused and said even if he didn’t have his music, he thinks he would get out often.  He feels a need to be with people.  It makes him feel alive and a reason to keep on going, even at the age of 91.

Next PostSeniors of NYC: This is Manny